Leopoldo Manzo Jr. says he told jailers about his ailments. Upon his booking at Santa Clara County’s Main Jail Dec. 18, 2014, he described how a teenager had riddled his torso with bullets a year-and-a-half prior and that two of the five rounds remained lodged in his organs, leaving him scarred by mental trauma and debilitated by nerve pain.

Despite the warnings, Manzo claims in a lawsuit against the county that jail deputies ignored his repeated requests for medication, equipment and care. To add insult to literal injury, he says they battered his already broken body on two separate occasions—in March 2015 and again a few months later.

Manzo reported both incidents to Internal Affairs. And in the months to follow, he went on to file numerous additional grievances asking the county to investigate allegations of medical neglect and excessive force. But his complaints to IA ended the way most do: with the Sheriff’s Office rejecting them and never saying why.

To address the concerns, in the spring of 2016, Sheriff Laurie Smith rolled out a new “early warning” software called Blue Team. Officials said they’d use the electronic system to track grievances and flag officers repeatedly accused of problematic behaviors.

For the better part of the next few years, however, inadequate training and a mounting backlog rendered the system effectively useless.

Of the 108 excessive force complaints submitted to IA since 2015—the year Manzo filed his claims and Tyree died—the unit sustained just one. And according to a recently published Harvey M. Rose Associates audit, only 23 were ever investigated. The rest were apparently rejected outright.

By that count, the IA unit upheld just 1.5 percent of all complaints from 2010 to 2018. That’s far below the statewide average. Data reported to the California Department of Justice shows that law enforcement agencies throughout the state sustained 8.4 percent of claims filed against officers from 2008 to 2017.

Meanwhile, patterns of problematic behavior by officers went undetected by the Santa Clara County’s Blue Team software thanks to a massive pile-up of past-due cases. Harvey Rose auditor Cheryl Solov found that 2,900 Blue Team reports awaited review last she checked in early 2018. Where the backlog stands today remains unclear, as Sheriff’s Office spokesman Sgt. Michael Low has yet to respond to multiple requests over the past month for a current tally.

Lt. Neil Valenzuela, who until recently oversaw the IA, tells San Jose Inside that the 2,900-case stockpile got cleared up. “Yes, we did have a backlog during the audit,” he says. “We actually contacted the creator of the [Blue Team/IA Pro] program at CI Technologies and had code written to automatically place reports into the system after review by the deputies’ chain of command.”

He says his colleague, Lt. Adam Oberdorfer, briefed the Harvey Rose team, “letting them know we didn’t have a backlog anymore and [that] reports go in directly.”

Solov denies receiving such an update. The only communication she received was a paragraph from Sheriff Smith, which Solov appended as an attachment to the audit. “The backlog of Blue Team entries is overstated in general,” Smith wrote in the missive. “However, the foundational problem has been resolved with new automated processes that transfer pending Blue Team entries into the IA Pro application.”

The sheriff’s response offered no data to counter Solov’s findings, so the public has to take her word for it for the time being. Lack of information is a recurring theme in Solov’s assessment of the sheriff’s internal accountability system.

The Sheriff’s Office has failed to prioritize high-level reporting or analysis of officer misconduct and ways to correct it, Solov wrote in her scathing report, which went live on the county website last month and has yet to come up for discussion by the Board of Supervisors. Further, she said, Sheriff Smith has yet to fulfill her promise of presenting use-of-force statistics to the public on a regular basis.

“A lack of reporting on critical incidents and proactive interventions can increase the civil liability of the organization,” Solov wrote in her audit summary, “and result in a loss of public trust and confidence.”

The Sheriff’s Office launched Blue Team in early 2016 amidst unprecedented public scrutiny, which might explain why it would rush to get the system up and running. But, according to Solov, the law enforcement agency implemented the software after extremely limited testing and without any department-issued memoranda or adequate training on how to use it.

“The Internal Affairs Unit reports that they planned a ‘train the trainer’ event to review the system with supervisors, but few divisions participated,” she wrote in her audit.

Things didn’t improve much after the program’s botched takeoff. Two years after the agency began using the system, it still lacked any written procedures or other resources to effectively leverage Blue Team’s capabilities. “Lack of training and resources available to staff likely resulted in higher error rates and a more lengthy review process for Internal Affairs than if these resources had been available,” Solov stated in her report.

Had staffing been the issue, the Sheriff’s Office could have requested more funding to make Blue Team a viable accountability mechanism. But that didn’t seem to be the case. In a March 2018 update on reform efforts, the agency told the Board of Supervisors that it already implemented the Blue Team-powered early warning system and required no additional help for the project. “It is unclear how eight new staff were provided by the board for the early warning system and associated processes, yet the system’s backlogs as reported by staff indicate that it is under-resourced and not resulting in reliable ‘warnings’ of potential problems,” Solov wondered, “but the board was advised that the system was operating as expected and required no additional resources.” 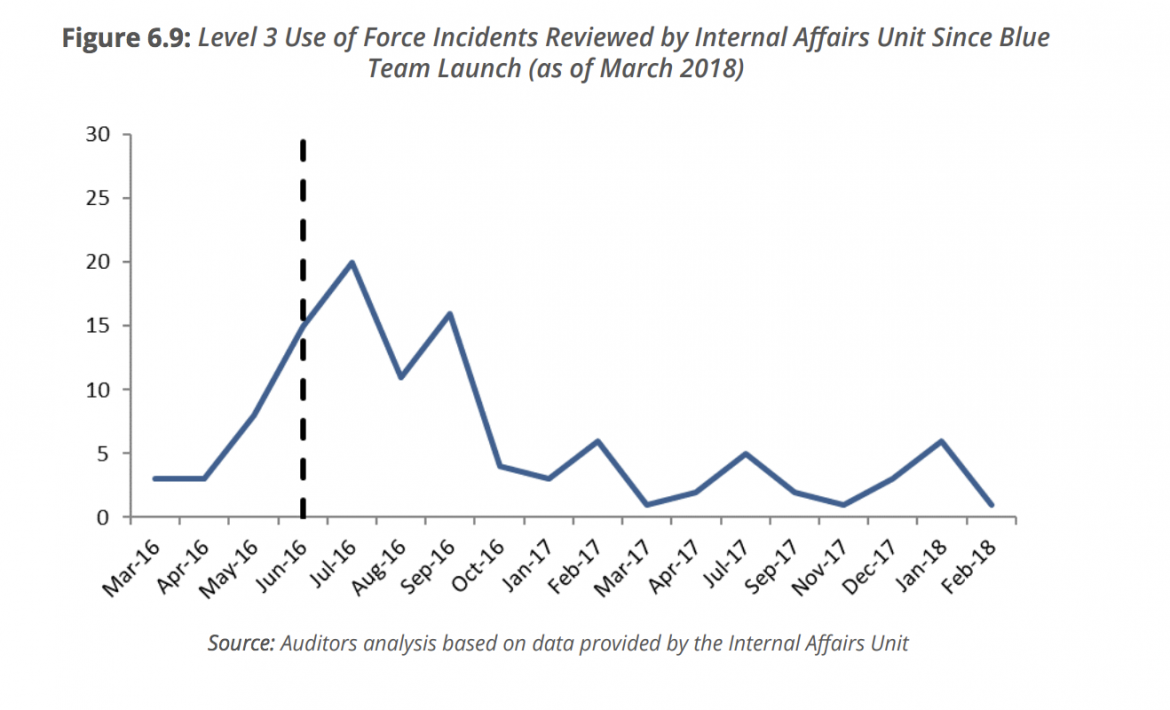 Solov advised the head of IA to drum up a one-year plan for how to fix the Blue Team’s seemingly interminable backlog. She also advised the county’s five elected supervisors to hold the Sheriff’s Office to a higher transparency standard by demanding data on excessive force and early-warning system.

In her formal response to the management audit, Sheriff Smith dismisses Solov’s critiques as misguided, or, in some cases, unfounded. “The Sheriff’s Office takes the management of the Internal Affairs Unit very seriously,” Smith wrote. “However, the issues listed within the audit have little merit.”

The sheriff’s refusal to provide much in the way of detail in her response to the audit reflected her treatment of Solov’s team throughout the year-long review. According to Solov, Smith seemed more concerned about a “leak” than the substance of the audit. Smith and her staff “did not refute, verify or discuss any of [the audit’s] content,” Solov wrote. Rather, “among other unusual comments made during the exit conference,” she said Smith and Undersheriff Rick Sung vowed to find out who leaked to San Jose Inside “an inconsequential and strange email” in which the sheriff demands proprietary notes and supporting material for the audit.

“We do not know how the email came to be widely distributed,” Solov wrote in a footnote, “only that the sheriff and the undersheriff used the time we provided to obtain their views on a draft of this report to first accuse and then threaten us regarding the email.”

In an Aug. 13 deposition of Sgt. Richard Glennon, Marinho asked if the agency trained him to review an accused officer’s entire history of misconduct as a matter of course as part of an IA investigation. Glennon seemed a little uncertain about how to answer that.

“As far as I’ve been trained, I couldn’t—I wouldn’t want to speculate,” he replied, according to a transcript of the exchange.

“I think in part of any IA investigation, you’re looking at the incident at hand,” he said.

“It doesn’t inform the incident at hand to know if that officer has other allegations against him regarding misconduct?” Marinho asked.

“I would agree that it would be relevant,” Glennon ceded.

Had the sergeant probed deeper into the 2017 excessive force claim Marinho was asking about, he would’ve found that the same officer—Deputy Rico West—was subject to a similar allegation just 13 months preceding the “incident at hand.” According to the Sheriff’s Office early warning system, however, that new claim wouldn’t have raised a red flag because it took place more than a year after the case assigned to Glennon.

That’s just for IA complaints. The Sheriff’s Office also fields an entirely separate class of allegations called grievances, which officers apparently aren’t required to factor into an IA investigation. In another Aug. 13 depo of Sgt. Adam Valle, he told Marinho that grievances don’t even show up in the Blue Team-linked IA Pro software.

“So, as we sit here today, you still don’t know whether or not you can … look up all grievances filed on a particular deputy, right?” Marinho asked.

“In IA Pro we can with the complaints,” he answered.

“Right,” Marinho said. “So my question was limited to grievances.”

Santa Clara Supervisor Joe Simitian—who sat on the Finance and open Government Committee a few years back when it ordered the September Harvey Rose audit and another that was released earlier this month—says the findings in both reports underscore the need for civilian oversight.

And they just so happened to come out just as the county voted to select OIR Group to lead an Office of Corrections and Law Enforcement Monitoring. Once the county finalizes negotiations, the independent oversight entity will have several primary duties: to audit and monitor the Sheriff’s Office, field complaints, analyze policy and issue recommendations, conduct public outreach and provide mediation.

“I think the timing of the reports are fortuitous,” Simitian says, “because you can take these two documents and hand them to the folks at OIR and you’ve essentially given them a road map—a work plan.”

The challenge will be to provide oversight for an office helmed by an independently elected official like the sheriff. Given the office’s lack of cooperation with Harvey Rose, Simitian says he’s sure the new monitor’s office will have a challenging time providing meaningful accountability.

A Harvey Rose report issued on Oct. 10 notes that of 623 recommendations issued by various groups to reform the Sheriff’s Office in the wake of the Tyree tragedy, the audit could only confirm that less than 10 percent were ever completed. “Those reforms,” Simitian says, “are only as good as the oversight that comes with it.”