The Peninsula Open Space Trust has purchased another 206 acres in mid-Coyote Valley, bumping the permanently protected land in and around Coyote Valley to more than 3,300 acres.

That 206 acres is in addition to an adjacent 60-acre property purchased in November last year, and another 65-acre property that the Peninsula Open Space Trust (POST) preserved earlier this month. The most recent acquisition from Shapell Properties Inc., comes after years of deliberations, planning and millions of dollars spent to shift the future of the rolling valley between the Santa Cruz Mountains and the Diablo Mountain Range from redevelopment to preservation.

“We took a little bit of a risk on that, not being quite sure how it was all going to fit together and what our plans would be to transfer that property to a public agency in the future,” Ben Wright, director of land transactions for POST said.

Though POST and the Santa Clara Valley Open Space Authority has pushed to protect the land from development since 2017, the effort started paying off in November 2019, when the San Jose City Council agreed to scrap plans to create 35,000 new jobs on 937 acres in the North Coyote Valley in favor of keeping the land relatively untouched. The deal amounted to $93.46 million, funded partly with $43.6 million by Measure T, which was approved by San Jose voters in 2018. 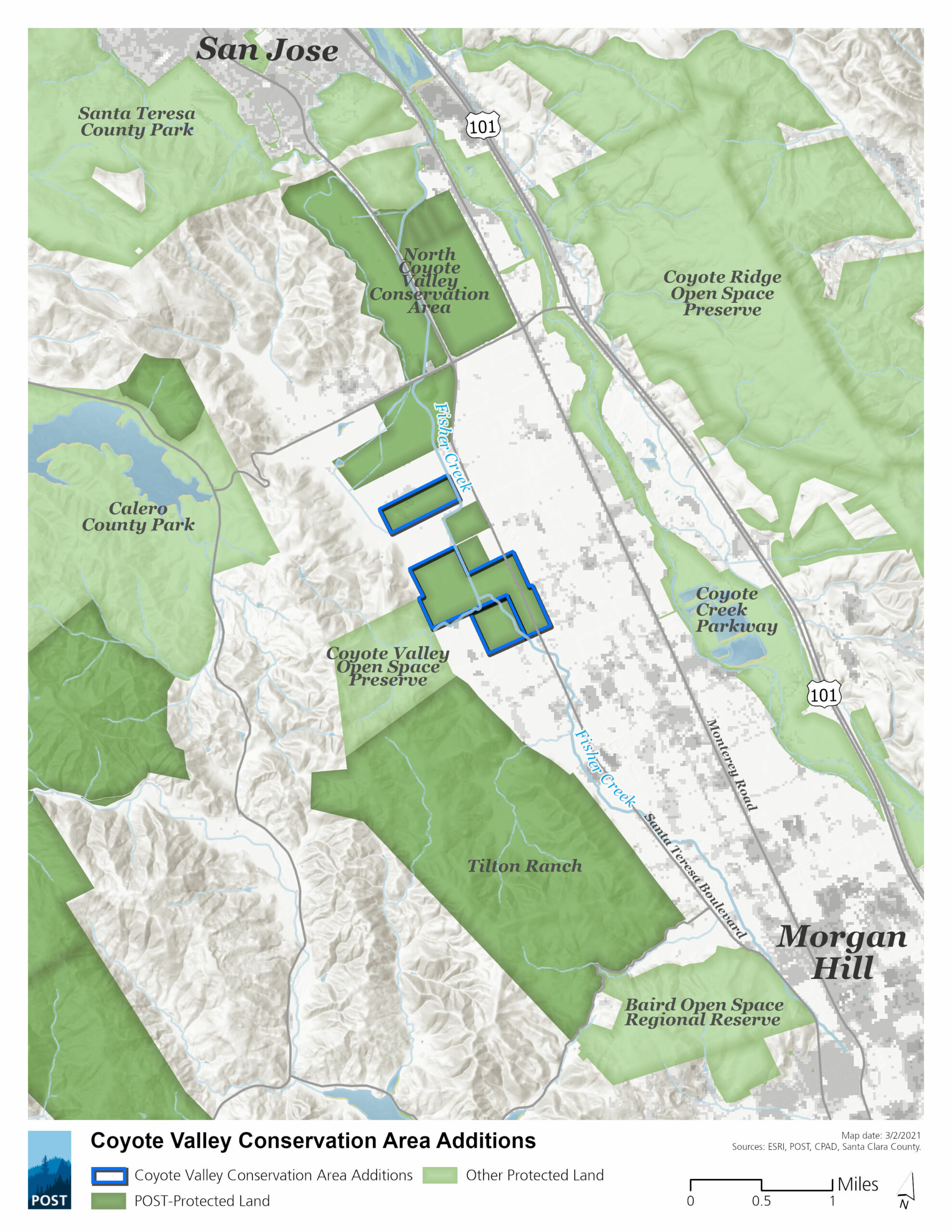 A map of the area conserved in mid-Coyote Valley. (Photo courtesy of POST)

At one time, the North Coyote Valley and mid-Coyote Valley were set to become home to up to 50,000 jobs and 25,000 homes combined.

“It’s taking a huge effort to work with private landowners and the city and the county to fulfill this conservation vision,” Andrea Mackenzie, general manager for Santa Clara Valley Open Space Authority said.

All that work could become a model for the state and county, in line with the 30 by 30 initiative signed by Gov. Gavin Newsom in Oct. 2020 and President Joe Biden in Jan. 2021, Mackenzie says.

“Covid has really opened our eyes to the important connections between people and nature,” she said. “There’s tremendous interest and response to the conservation vision that people are seeing coming to fruition in Coyote Valley.”

“It’s been very fast,” he said. “A lot of the parcels have turned green just in the last four years, so it’s a very rapid pace, starting with the large 937-acre collaborative effort and now continuing with several of these key pieces.”

Leaving the Coyote Valley unpaved, conservation advocates say, will help Santa Clara Valley residents by helping to prevent flooding in areas downstream from the valley. It will also go a long way to protect the water supply and maintain water quality in the groundswell of Coyote Basin and Santa Clara Basin, where most of the area’s water supply is stored.

“The vision is to protect and restore the greater Coyote Valley for the multiple conservation benefits that it provides…across one of the last undeveloped valley floors in the San Francisco Bay Area,” Mackenzie said

“I think it’s fair to say that in the next couple of years,” Mackenzie said, “you’ll have a seamless green belt of protected lands from Morgan Hill to San Jose along the Fisher Creek Flood Plain.”