Ravel, the former chair of the Federal Elections Commission (FEC), and Cortese, who serves as the District 3 supervisor for Santa Clara County, are both vying for state Sen. Jim Beall’s open District 15 seat this fall.

The letter signed by Ravel’s campaign manager Andrew Berthelsen accuses Cortese of deceptively using images of the former president in mailers and television and online advertisements in order to mislead voters.

One of the photos, which sits front and center on the supervisor’s campaign website, was taken at Moffett Field shortly after Air Force One landed on the tarmac. In it, Obama is seen placing his hand on Cortese’s left shoulder. 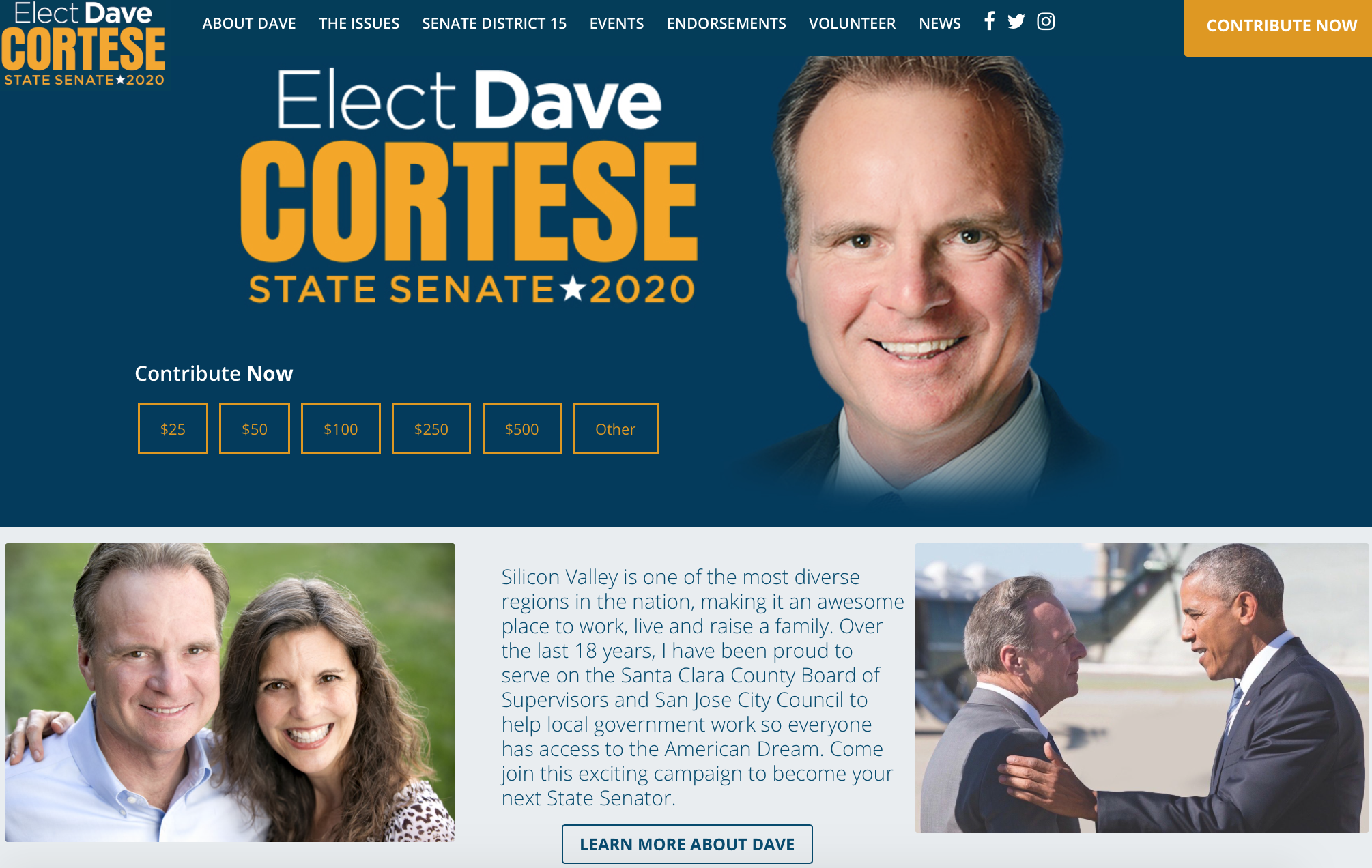 The photo of Cortese and Obama is pictured on the supervisor’s campaign website.

“By using these photographs, you are clearly attempting to imply the support and endorsement of President Obama for your campaign, which is false and misleading,” Berthelsen wrote in the missive.

In August, the former president included Ravel in his “first wave” of endorsements for the 2020 general election. In 2009, Ravel was named the deputy assistant general for the Torts Branch and the Office of Consumer Litigation under the Obama administration.

A few years later in 2013, the president appointed her to the FEC where she served until 2017 when she resigned over partisan gridlock.

Berthelsen said Cortese’s political use of the photo violates rules set by the Obama White House, the National Archives and Records Administration and the Obama Presidential Library. Per policy, photos of Obama “may not be used in any commercial or political materials, advertisements, emails, products, promotions that in any way suggests approval or endorsement of the President, the First Family, or the White House.”

Ravel said that Cortese’s use of the image is “deceptive” and confuses voters. She told San Jose Inside that she’s heard from multiple District 15 residents who thought both candidates were endorsed by Obama. “Those sorts of things first off, it’s illegal to be utilizing those photos unless he’s endorsed,” she said. “There’s a clear statement and it’s a federal policy so there’s that. But other than that, I think more disconcerting is the willingness to essentially defraud the public.”

In a statement, Liccardo said he was present when the supervisor greeted Obama on the tarmac—in one of the photos used by the Cortese campaign, the mayor is seen in the background. “Cortese introduced himself, and spoke briefly with the president—as we all did—and I never heard any suggestion by President Obama that he would politically support Dave Cortese for any office,” Liccardo said.

“A ‘rope line’ picture used in this way—juxtaposed with assertions that Cortese is ‘endorsed’ by different groups—is intentionally misleading,” the mayor added. “I ask Supervisor Cortese to make clear to the voters that he has NOT been endorsed by President Obama and to denounce the misleading campaigning being conducted.”

Ravel’s campaign also sent the cease-and-desist warning to Amber Parrish Baur, the treasurer of the pro-Cortese Opportunity PAC. The political action committee has sent out multiple mailers in recent weeks with photos of the supervisor and Obama. 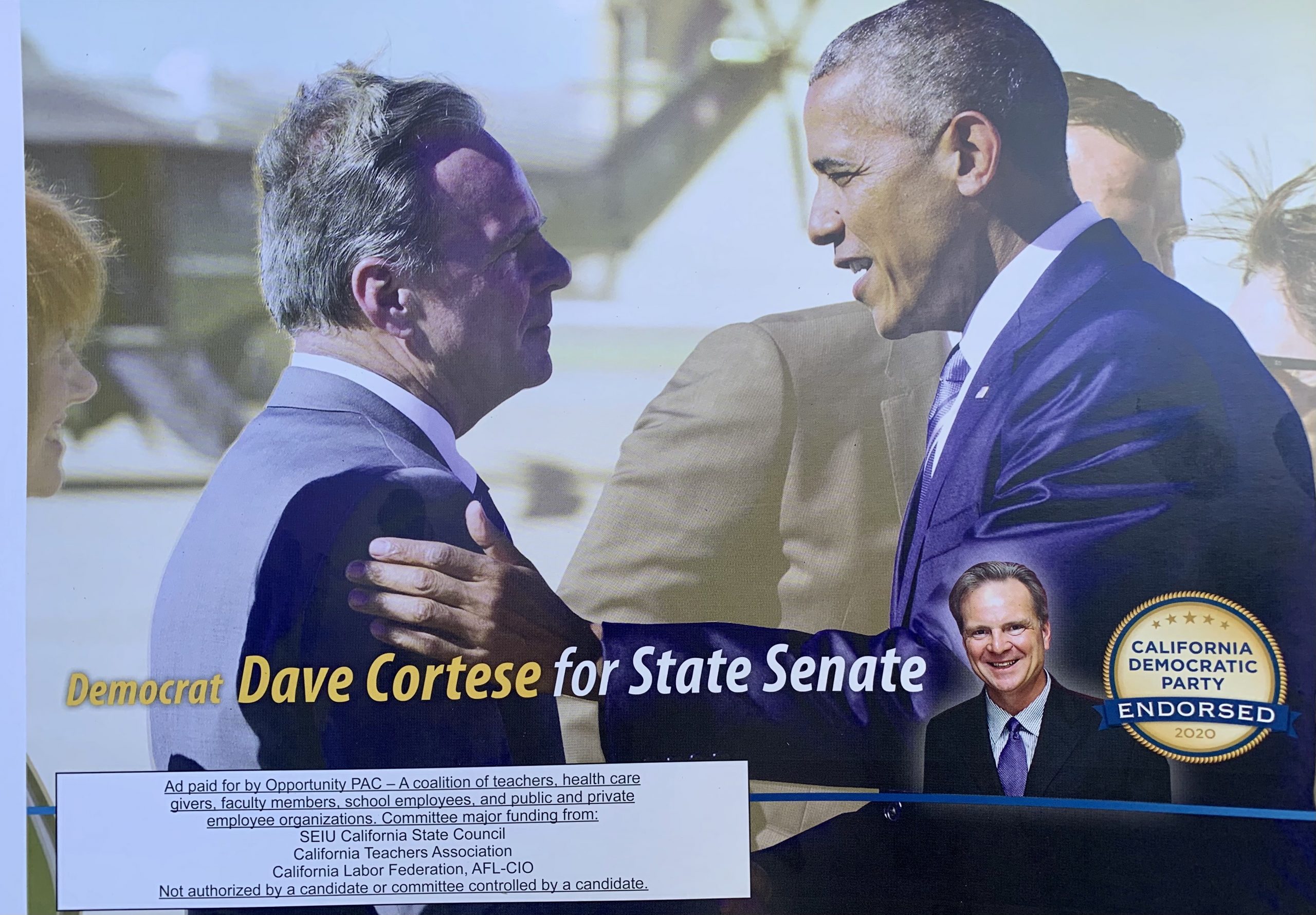 An Opportunity PAC mailer uses one of the same photos of Cortese and President Obama.

According to the mailer, the PAC has received a majority of its funding from the SEIU California State Council, the California Teachers’ Association and the California Labor Federation, AFL-CIO. The PAC is an independent expenditure committee, which means it is not directly connected and doesn’t coordinate with Cortese's campaign.

The cease-and-desist notice asks Cortese’s campaign and the Opportunity PAC to remove the images from all online and television advertising and halt the production of any future mailers with the photographs.

Berthelsen said Cortese and the Opportunity PAC have three days to respond to the letter to confirm they’ve stopped using the image.

If they fail to do so, Ravel’s campaign plans on contacting Obama, the National Archives and Records Administration and the Obama Presidential Library to alert them of the “clear violations of the provisions of the use of the photos.”

Cortese, his campaign manager and a spokesperson for the Opportunity PAC could not immediately be reached for comment.