A Morgan Hill business owner teamed up with firefighters and volunteers from throughout the Bay Area recently to donate crucial equipment to fire departments in war-torn Ukraine.

Shawn Sahbari, President and CEO of Komodo Fire Systems, Inc., became involved in the effort through his friend and company’s technical advisor, retired Menlo Park Fire Chief Harold Schapelhouman. “Chief Harold” asked Sahbari months ago if he could help in an effort to donate supplies and equipment to Ukrainian firefighters, Sahbari recalled. 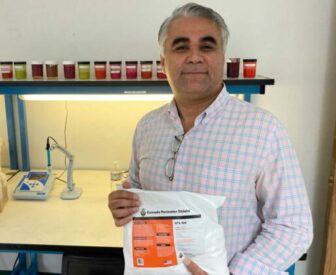 “The concept was, American firefighters helping Ukrainian firefighters by just giving them used equipment, but good equipment, that we hope they can use,” Sahbari said. “I said if there’s anything we can do to give a little bit of hope to the people that are in that kind of suffering, then by all means that’s the least we can do.”

The effort culminated in an Aug. 11 gathering at Komodo Fire Systems’ headquarters on Jarvis Drive, where firefighters and volunteers from throughout the state helped load the donated items onto a 40-foot shipping crate. From there, the supplies began their journey to the eastern European nation that has suffered from a sustained invasion by neighboring Russian forces since February.

Donated items included everything from helmets, hand tools, clothing and other firefighting supplies.

The effort began in April, with Schapelhouman and others reaching out to agencies about the need for tools in Ukraine.

Schapelhouman said that his position as an immigrant and husband to a half-Ukrainian woman has brought the issue of the war in Ukraine closer to home.

The former fire chief, who also worked for the Federal Emergency Management Agency and the California Governor’s Office of Emergency Services for urban search and rescue, believes that no matter what, those doing rescue work in Ukraine need aid.

With many efforts aiding Ukraine in other respects, Schapelhouman wanted to focus on firefighting equipment, which can be hard to come by.

Schapelhouman said the donations of operable equipment poured in from fire departments and agencies in the Bay Area and beyond, including the San Francisco Fire Department and San Mateo Consolidated Fire Department.

“That’s the nice part of doing the work is watching people come together for a common cause and be able to have them feel satisfied that they got to participate in something that was worthwhile,” Schapelhouman said.

The retired chief added that a key aspect of the operation has been making the appropriate contacts on the loaded shipping container’s journey to Ukraine, in order to make sure the shipment arrives at its intended destination. The container is on its way to Poland before its contents are dispersed to different areas of need in Ukraine.

“This shows that at least they have firefighters here that are thinking about them,” added Sahbari.

Once the items safely make their way to Ukrainian firefighters, their Bay Area counterparts plan to continue the effort with another donation. Sahbari said that operation is already in its early stages, and he hopes to help out again.

Komodo Fire Systems moved to Morgan Hill about two years ago, and some of the company’s patented fire suppressant products have become commercially available within the last year, Sahbari said.here for Information about how to donate to Ukrainian relief organizations The company was founded on the growing need to address the western U.S. wildfire problem from a “holistic approach” that is environmentally safe and capable of preventing massive losses of property and life.

Sahbari said the location of CalFire’s Santa Clara Unit in Morgan Hill was a factor in his decision to move Komodo’s headquarters from Gilroy.

“Komodo was designed as a preventive solution,” Sahbari said. “We saw the wildfire problem as a regional and global issue and it was expanding year over year in terms of the number, and size of fires, and the duration they were burning.”

Click here for Information about how to donate to Ukrainian relief organizations.